Among the different lines of research in which Aitiip Technology Centre is involved, advanced robotics and the development of innovative cognitive precision systems aimed at improving the automation of production in industrial environments stands out. Within the framework of the SHARKY project, under the OC2-TRINITY call of the European Union's H2020 programme, Aitiip's team of engineers have created an innovative ergonomic tool called "Dummy Tool". The use of this device will optimise robotic programming and human-robot collaboration on production lines, especially in the heavy mechanical industry.

The "Dummy Tool" is an agile production system that gives the operator a high degree of autonomy of movement, since, almost effortless, it allows capturing spatial trajectories within the work cell, in six degrees of freedom. It is a light and ergonomic device that the operator can easily hold in his hand while he moves along the route the robot will be required to work onwards. At the flick of a switch, in real time, a camera system will record the visual information of the specific section and then transform it into 6D coordinates. 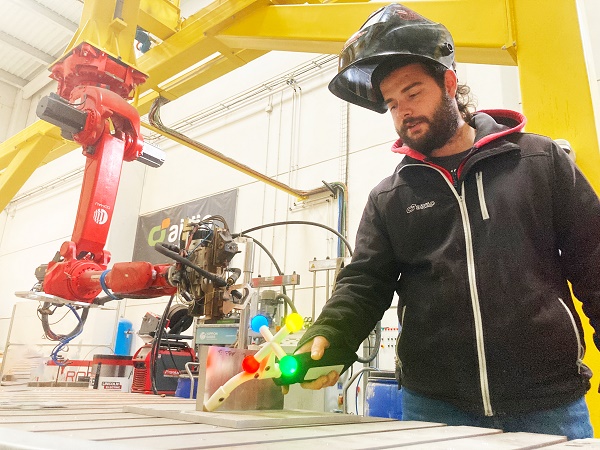 This information will be transmitted directly to the robot so that it can clone the movement that the operator has previously traced with his gestures. Thanks to this system, in addition to optimising manufacturing by 50% in terms of time and precision, workers will be exposed to fewer risks when carrying out, for example, difficult industrial cutting or welding operations that are physically very demanding, in which they are also exposed to light levels that are harmful to health.

SHARKY's technology, currently applicable to the naval industry (pleasure and rescue boats), will also make it possible to reduce the preliminary inspection phases or the preparation of the work set-up, and will even reduce the generation of waste in the plant by 30%. Machine learning and additive manufacturing (3D printing) processes have been incorporated into the development of this tool.

The system also has an artificial intelligence (AI) layer that refines the captured trajectories, adjusting them to the geometry of the parts on which the robot has to work. At the same time, it smooths the trajectory itself, eliminating operator-induced noise and disturbances. In this way, the result will leave a smooth and geometrically consistent curve that fits perfectly to the work surface.

The SHARKY project is part of the European Union's Horizon 2020 TRINITY Call-2, which aims to fund initiatives that foster the development of advanced robotic solutions for European industry of the present and future. SHARKY involves a total of three partners from Spain and Italy: the company SHARKSILVER, the University of Bologna and Aitiip Centro Tecnológico.